In the Total Laparoscopic Hysterectomy or TLH, the laparoscope is used to remove the entire uterus from the abdomen. The ovaries may or may not be removed at the same time.

Like other minimally invasive surgeries, this procedure is designed to cause less pain than abdominal hysterectomy with the added benefit of a shorter recovery period. 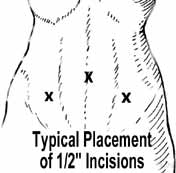 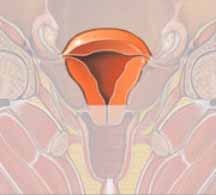 First, the scope is introduced through a small incision in the navel. Smaller incisions are then made in the lower abdomen, to allow for passage of additional instruments.

During the TLH, the surgeon separates the uterus (highlighted in picture) from its ligaments and blood vessels, then detaches it with an incision at the top of the vagina.

After the uterus is removed, the vaginal incision is closed, preserving vaginal depth.

The procedure requires general anesthesia, and a hospital stay of one to two days. Recovery before returning to work is usually 7-10 days.

Endometrial Ablation is a procedure where all or part of the lining of the uterus (endometrium) is removed or destroyed in an effort to improve vaginal bleeding (endometrium highlighted in picture).

While some patients will cease to have menstrual periods others may continue to have periods albeit of lighter flow.

The procedure usually requires placement of a hysteroscope by a vaginal approach to allow the endometrium to be seen.

While many methods are available to perform ablation, the most common use either electro-surgical devices or thermal devices like the Gynecare Thermachoice Balloon or Versapoint System.

The procedure usually requires general anesthesia and can be performed as outpatient surgery. Recovery before returning to work is usually a week or less.

How well do these procedures work? Overall success rates are about 68%. See below.